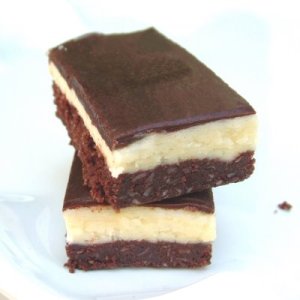 Intro: I’ve forgotten most of the names of teachers, schools, and childhood friends.  But I vividly remember almost everything I’ve ever eaten.  I suspect it might mean I’m shallow. For example, I still feel nostalgic about a chocolate cake that my mother cooked–once–when I was nine years old. It was made, surprisingly, with spices and mashed potatoes and baked in a 9” tube pan. Gone forever, like the names of my childhood friends.

For those of you who are not as shallow as I, it may seem odd to put posts about food in a blog about stories.  What can I say…lots of my memories are about food. This post is to honor one of my favorite sweets: Canada’s own Nanaimo Bars.

If you’re reading this in Canada, you are not surprised. A colleague of mine, originally from Toronto, called them “Canada’s contribution to world cuisine.” You can buy them everywhere in Canada: on the ferry going to Vancouver Island off the West Coast or in some out-of-the-way corner store in Newfoundland off the East Coast. Buy them from your neighborhood Tim Horton’s donut shop, pick up a mix from the grocery store, or use the recipe your mother handed down to  you.

If you’re American, you probably never heard of them. A pity. If you’ve always thought the the expression “can never be too rich” applies to sweets, these Canadian treats are for you. A bottom layer with graham cracker crumbs, cocoa, nuts, and coconut.  A middle layer of creamy butter icing.  A top layer of melted chocolate. They’re easy to make; they look hard; they keep well; and almost everyone loves them. What recipe is better than that?

When my son Raj was about four he was eating a Nanaimo bar and said, “Mommy, when I am very, very, very old and just about to die, give me one of these. I will eat it…quickly.” I don’t recall him ever being so impressed with anything else I ever made.

My son, Raman, in Kansas City has made them his specialty. I remember him trading some years ago with a colleague for a truly outstanding apple pie.

I first tasted them when I was in elementary school in the 1950s. My Aunt Dorothy got the recipe from her friend, Mrs. Layton, and passed the recipe on to my mother. And for most of my life we called it “Mrs. Layton’s recipe.” We liked it very, very much.

According to Wikipedia, Nanaimo Bars were invented in the early 1950s by a woman named Mabel Jenkins who lived just south of Nanaimo, British Columbia.  She submitted them to a fund raiser cookbook called the Ladysmith and Cowichan Women’s Institute Cookbook. Later the recipe turned up in other cookbooks, sometimes called Mabel’s cookies.

In 1986, the city of Nanaimo had a contest to find the very best Nanaimo Bars.  Out of a hundred contestants, Joyce Hardcastle won.  Find her recipe and several variations here at the website of the Buccaneer Inn, Nanaimo, B.C.

The only literary work I’ve found (so far) about Nanaimo Bars is called “Sex, Life Itself and the Original Nanaimo Bar Recipe.” It’s written by Kim Blank, a professor in British Columbia, who also writes about Wordsworth, Shelley, and Keats. I haven’t found it on amazon or in Chapters (Canadian book stores). But I’ll keep on looking.

Finally, here’s my recipe, or rather, Mrs. Layton’s recipe. It’s not quite traditional: it doesn’t use custard powder or vanilla pudding and it uses unsweetened chocolate on top. Heresy, but equally delicious. Enjoy.

1. Melt stick of butter.  Add cocoa and sugar..  Break in egg and cook one minute over medium-low heat.  DO NOT BOIL.

3. Press down hard in 8” X 8″ pan.  (If you want thinner slices, use a slightly bigger pan.) Chill.  If this layer is well chilled, it will be easier to spread the next layer.)

6. Chill in fridge.  Cut into squares. It helps to dip the knife in hot water before cutting each row. 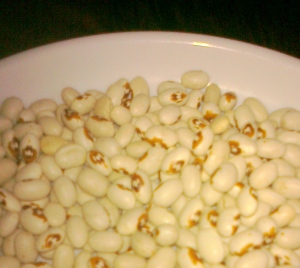 Intro: I promised the recipe for my mother’s homemade baked beans. Here it is. Now, if your family’s recipe is better, we all want to know.

My mother used to say that yellow-eyed beans were best.  But she could never get them out West, so she used navy beans (also traditional) or a mixture of navy, kidney, and pinto beans (not traditional at all, but good).

If you want to use a full pound of beans, which is just a little more than 2 cups, no problem.  I use less because my bean pot isn’t big enough to hold that much.

Not blackstrap.  You want the label to say “fancy” or “mild.” Mom liked Crosby’s Fancy Molasses.  In the States, if I can’t find Crosby’s, I use Grandma’s or Brer Rabbit. All are just fine.

Some people add a little brown sugar too. I have no idea why.

Look for mustard powder in the spice section of your supermarket. I like Colman’s mustard–just because the yellow metal tin is charming. Mustard lasts forever. If you mix it with water, you can make blazingly hot mustard, good for egg rolls.

Your supermarket probably stocks this, even if you’ve never noticed it there before. Here in Saratoga, I buy it in a 12 ounce package, good for 3 pots of beans. It keeps forever in the fridge, which is good, because I don’t make beans often.

In my opinion, neither the salt pork nor the onion tastes good cooked in beans. But they contribute greatly to the flavor of the beans, and they are definitely traditional. You could substitute bacon, but remember, it won’t get crisp cooking in a pot of beans. In my vegetarian phases, I have substituted a stick of butter, which is delicious.

My mother felt daring when she added ketchup. She felt it was her own idea though I’ve seen quite a few old recipes that include it. (Sorry, Mom.)

Some old recipes suggest a pinch of baking soda to make the beans softer, quicker. But I’ve read that it destroys nutrients, and you don’t really need it

Beans are not a last minute affair.  Ideally you’ll start the evening before although you can begin early in the morning that you want to serve them. I’ll explain how below.

You can cook beans in a crock pot or a covered casserole instead of a bean pot, but the beans may not be quite as dark and delicious.

The water will evaporate quicker in a casserole; you’ll have to keep a sharp eye on it. It  will evaporate more slowly in a crock pot. Be careful not to add too much liquid.