After my last post, several people (mostly storytellers) asked for another of the tales collected by von Schönwerth–tales that were forgotten in a Bavarian archive for a century and a half.

I’m so grateful to my friend, Sigrid Kellenter, for translating them from Prinz Rosszwifl, a recently published selection of those stories.

Sigrid’s interest in German fairytales goes way back. She  taught a popular college course in German folktales for years. I was once lucky enough to work with her and her students on their computer presentations of those stories. What fun. Recently she and I did a presentation on German fairytales that was conceived with the news in 2010 that the stories had been found.

Enjoy the story. It’s odd and abrupt–it’s a literal translation–but I think you’ll find it intriguing.

A count had a daughter. She was, however, very ugly and thus disdained by all. This hurt her deeply and she kept mostly to herself.

Once, alone in her room, when she wept about her fate, a tiny man all of a sudden stood in front of her and offered her three plums. “Go to the water,” he said, “and throw in one of the plums. Two mermaids,  glistening like the sun, will rise up. Then throw in the second plum and one of the mermaids will step out of the water and come to you. Try hard to get her belt. Then throw the third plum into the water and the other mermaid will come and join you. Seek to get her necklace. Adorned with belt and necklace, you will be the most beautiful woman, bright like the sun. If you put them on the wrong way around, you will become invisible. Take care that you do not lose belt and necklace or carelessly take it off. Whatever may come, I will always help you.”

The count’s daughter did as she was told. She went to the water, threw in one plum and two mermaids rose up, so beautiful and shiny, one could hardly look at them. She threw in the second plum and one mermaid stepped out of the water and offered her her belt with the promise she would become queen but would have to let her have her third child when it turned three years old. The daughter threw the third plum into the water and the second mermaid came to her and offered her her necklace if she promised to give her her most beautiful child.

Adorned with belt and necklace the count’s daughter became the most beautiful woman and soon was made queen.When she walked in her garden she was resplendent like the sun and the garden resembled paradise. When she gave birth to her third child, it was a little boy, equally as beautiful as the first two. When this boy was three years old and the maid took him for a walk near the water, a mermaid appeared and pulled him down into the water.

Again she gave birth, and the sixth, another boy, was more beautiful than any of his siblings. The king loved him more than his own life. The queen gave strict orders to keep this child away from the water. One evening an old woman, her head covered with a white veil, came and asked to be given a bed for the night. Her wish was granted. When everyone was asleep, she took the boy and fled with him.

Messengers were sent everywhere but they returned without having found the boy. Then the queen confessed what had happened to both boys and, full of anger, the king  had her thrown into the same water from where she had received her belt and necklace. The water did not hurt her, however. She did not even get wet. She sank down into the magnificent palace of the mermaids and met her two children there.

Once, when the mermaids rose up to the surface of the lake to enjoy a swim, the mother saw an opportunity, turned the belt and necklace the wrong way around and fled, invisible, with her children who already had webbed feet. The mermaids raged terribly and made such huge waves, one could believe everything would be destroyed. But the joy was greater in the castle of the count.

Translated in 2013 by Sigrid Kellenter. 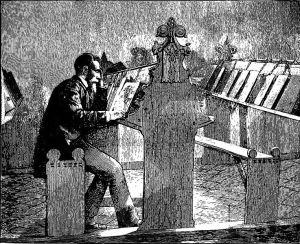 They were forgotten, locked away for a hundred and fifty years, not in a tower like Rapunzel or in a forest like Sleeping Beauty, but in boxes and file cabinets in Bavaria. Fairy tales. Hundreds of them. All collected by a contemporary of the Grimm brothers, well-respected in his time, Franz Xaver von Schönwerth.

In 2010 they were rediscovered. When I heard the news, my heart was all aflutter. (Truly.) Though the world is awash with fairy tales, more than I will ever be able to read, I wanted to get my hands on those lost stories and read them.

Not easy. They are not yet available in English, and I don’t read German.* Fortunately, I have a good friend, Sigrid Kellenter, who taught a course in folktales when she was professor of German at a nearby college. She and I put together a presentation for a lifelong learning group. She talked about fairytales; I told them. The presentation was a great success. Much of the credit goes to Sigrid; her talk was wonderful.

I have to confess…I asked a lot of my friend. She not only had to prepare her own half of our presentation, she had to read the only collection available of von Schönwerth‘s tales, Prinz Rosszwifl, summarize many of them for me in English, and translate a selection for me to tell. I am so grateful: I got to read and tell these fascinating stories.

Now if you, too, love the idea of reading these forgotten tales, here is one of the stories she translated for me. Sigrid has not made changes in her literal translation. We want you to get a feel for how the story was originally transcribed, without all the changes that come over time. She made no attempt to make the story more plausible, more literary, or more politically correct.

Even the Grimm brothers had cleaned up their stories to make them more acceptable to their nineteenth century readers. Von Schönwerth had not.

from the collection by Franz Xaver von Schönwerth
translated by Sigrid Kellenter, 2013

A carpenter, who was being kept in a dungeon, sent word to the king that if he would let him live, he would build him a treasure the likes of which no one in this world had yet seen. It was done. The carpenter brought a little box to the king, sat down on it, and it began to roar and lifted off and carried the carpenter out of one window and back into the room through another. The king kept the little box in his treasure room.

The king had a son to whom the servants had ever to bring new toys. Since he broke every one of them and there was nothing else, they brought him the little box. The boy hammered around on it and wanted to make a little wagon for himself from it. The maid brought a rope, attached it, to pull him around in it. Hardly had he sat down firmly, when it lifted off and flew in the direction of the open window and out, no matter how hard the maid pulled on the rope, and disappeared.

It was quite a journey, until the rope got caught in a tree top and the flight was halted. In the tree was an abandoned stork nest, where the boy rested for a while, and he left the little box behind, when he descended from the tree to go to the next town, nearby. He passed a shoemaker who needed an apprentice and entered service with him.

This city had a king who had not been able to have children. It was prophesized he would have a daughter who would bring shame on him when she grew up and took up with a stranger. So when the king eventually did have a daughter, he thought for a long time about what to do and he came up with the idea to build a sky scraper tower with a little room for the princess on top. And thus it was done.

The young shoemaker, who was still wearing his beautiful red shoes from home and had not torn them, heard the story about the princess who lived high above the clouds, and was beautiful to boot, from other shoemaker apprentices. So one day, he took off and went back to the tree with the stork nest, climbed up, sat down on his little box and flew off and into the princess’s tower window. And he did that every day after work, until he was suspected of doing it.

The king became mad about this. He had the window sill covered with birdlime (a heavy glue) in order to catch that “bird man,” and it so happened that a shoe was found glued to the sill. By the king’s orders, the shoe was passed from hand to hand and foot to foot. A high reward was promised to the one who would fit into the shoe. It was never claimed until finally the shoe came to the young shoemaker as old leather. He did not pay attention to the trap, slipped into the shoe and was caught and sent to prison.

The princess, when asked the name of her lover, pretended she did not know and lied, but she gave away her secret when she was told the shoemaker would become her husband and the king was already preparing their wedding bed. However, the king was preparing a funeral pyre on which he planned to burn the couple.

People ran to see what was happening. A big crowd assembled. All cried and bemoaned the fate of the unhappy young couple. They, however, sat on the wood pile in an embrace and looked cheerful. The moment the wood began to crackle and smoke, the young shoemaker pressed down on his little box under them; it roared up like a horse with wings and flew through the smoke and flames high up into the air. The king and the crowd were left with nothing. When the prince got home to his parents, he married the beautiful princess.

*One of von Schönwerth‘s stories has been published in English, “The Turnip Princess,” but it’s not one of my favorites. Maria Tatar, from Harvard, points out that copies of many of the tales have long been stored in Harvard’s Widener Library.