This Sunday I’m rowing in Boston—along with more than two thousand other rowers in the C.R.A.S.H.-B. World Indoor Rowing Championship in the Agganis arena at Boston University. Thousands of other people will be there too, cheering us on.

I know. I know. You can’t imagine me doing this.

“Indoors?” you ask.“How do you row indoors? You need water to row.”

Well, these days, Boston is frozen solid and buried in snow. I’ll be rowing indoors, on an indoor rower.

“You mean one of those weird, low-to-the-ground contraptions you see in the gym that nobody ever uses?”

Yes, them. But indoor rowers have advantages. Unlike boats, they’re not tippy. I never fall off, and I never get wet. And unlike treadmills, there’s no wait for them at the gym.

World class rowers will be in Boston on Sunday. I am not one of them.

Those of you who know me are supportive—and utterly flabbergasted. After all, you’ve only known me as a squishy woman a little overweight and a little out of shape. And a senior citizen besides.

Let me tell you. Not only am I skinnier now, but, for the first time in my life, the slightly embarrassed owner of spandex shorts. (No pictures please.)

It’s been a bizarre journey. It involves an old friend from the YMCA, Over a year ago, Dan quit his job in IT and he and his girlfriend Laurie, now his wife, opened a fitness studio. Full Circle Fitness New York.  Dan’s an ex-football player, a weight lifter—and a rower. He lost a lot of weight years ago and wants to help others do the same. Put exercise fanatic and softie together and you get Dan. A good guy.

I wanted to be supportive, so I signed up. I paid a monthly fee and went every day, Monday to Friday And between walking to the exercise class and doing all those jumping jacks and planks and triceps dips and burpees and god knows what else, my body started to change.

As I changed, Dan, a man of boundless, irrational optimism, began to conceive big dreams for me, and they were all about indoor rowing.

“Why indoor rowing?” you ask.

It’s like this. Dan and I got to know each other years ago in an indoor rowing competition at our local YMCA. I’d signed up because it was January and I’d just made my annual resolution to get fit and lose weight. Turns out that if I rowed slowly enough, I could row for hours, in a gentle, slow, rocking chair cadence. I could also listen to music or talk to the people around me. For that contest, speed didn’t matter. Only distance. Since I’m retired: I could stay for hours.

Lots of other people, Dan included, signed up too and also spent many hours rowing. They were rowing a lot faster and harder than I, but I didn’t care. Only total distance mattered.

Several of us got ridiculously competitive. As we rowed, side by side, we got to know each other really well.

Afterwards, Dan became passionate about rowing, joined a local rowing club and competed in the water and on the indoor rowers too.

Fast forward to this past year. Dan had not forgotten that once upon a time, I’d rowed 600,000 meters in a month. Apparently he’d forgotten how slow I’d been.

“Margaret, why don’t you compete in the world indoor rowing championships in Boston. You could be competitive!”

But I’d come so far over the past year that without thinking deeply, I said, “sure, why not?”

Huge chunks of Dan’s boundless energy and enthusiasm became devoted to helping me train for Boston.

I suppose I’m as ready as I’ll ever be. This coming Sunday, Dan and his wife, Laurie,  and my husband, Jay, will go to Boston too. Dan will be beside me while I race, yelling out advice like “Legs! Use your legs!” and exhorting me to greater efforts. Jay and Laurie will be in the stands.

I’ll be wearing the dreaded spandex shorts and a tight-fitting top that doesn’t cover nearly enough of me. That’s the way everyone dresses, so they tell me.

The other day I was at the Y and met Doug, another of the obsessive-compulsive crazy people who rowed indoors with Dan and me several years ago. My husband had told Doug of my plans for Boston. (By the way, It makes it difficult for me to be a quitter when my husband is being so darned supportive.)

Doug is one of the world’s kindest men—but he remembers my rowing. He also knows how fast the rowers will be in Boston. All of the rowers—even the women 70 to 74 years old.

Doug spoke to me ever-so-gently, to prepare me for my inevitable crushing defeat, “Margaret, you do know, don’t you, that you can’t win?”

It had occurred to me. I’m going anyway. I’ve spent a lifetime avoiding interesting activities—like art classes and Texas line dancing and guitar playing—because I believed I couldn’t be good at such things. But if anything is worth doing, surely it’s worth doing badly.

I’m going to Boston to row as hard as I can. I don’t expect to win the hammer given to each winner. But I do expect to meet interesting people from all over the world.

I’ll let you know how it all turns out.

And oh yes, for the first time since I was thirteen years old, this year I didn’t make a resolution to lose weight or to get fit. I’m close enough. 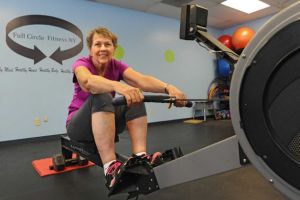 training for the rowing competition

(The photo of me was part of an article by the Albany Times Union.)