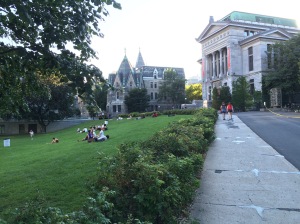 When I went to McGill I was poor. Oh I was not wretchedly poor or chronically poor. I just didn’t have any money at the time. (I lived in the women’s dorm, so I didn’t go hungry.) I expected that one day I would have enough, so it was okay.

I was at McGill because of a fourth grade teacher whose name I don’t even remember. She had sent a letter to my mother asking her to come to the school for a conference. My mother never went to conferences for me. “Why should I go to the school to see Margaret’s teacher? She never gets in trouble.” But the teacher informed her that I had done well in some standardized tests and, when I got older, I must go to a university.

“Seems like an odd reason to call us to the school. Just to tell us she’s smart. We don’t have the money for university.” And so they said to me, “Margaret, your teacher says that you have to go to university when you get big. We don’t have that kind of money, so you’ll have to figure out how to pay for it yourself.”

Years passed and their order stuck. Luckily colleges were still giving out big academic scholarships at the time. I got one that paid for tuition, books, and room and board—but not much else.

The first term was especially hard. I’d gone to the Banff School of Fine Arts to study university-level French (handy if you plan to go to university in a French-speaking province). Fun, but it meant that I didn’t have much time to earn spending money. 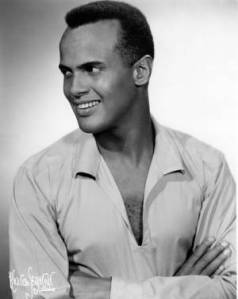 A girl wants to go out with friends once in a while, share a pizza, or buy a coke from the coke machine, and there was usually not enough money for any of those. Most tragic in my young heart: Harry Belafonte came to Montreal, all my friends went to see him, and I could not. (Actually, I still feel sad about that.)

Many years later, when  she was dying, my mother scolded me. “You never told us you needed spending money in college. If you had told us, we would have sent you something.” Too late Mom.  I was a literal-minded kid who never knew that there was some flexibility in our family’s budget. I’d never forgotten what I was told in the fourth grade.

My friend Emily, from Loudonville, near Albany, was determined that my relative poverty would not interfere with our friendship. We would find things to do together that didn’t cost money. On Sundays the university library was closed. Most everything was. But Emily  was Jewish and there was a Jewish library in Montréal, open on Sundays. We could study there. We’d catch a city bus and walk a couple of blocks in a nice residential neighborhood. 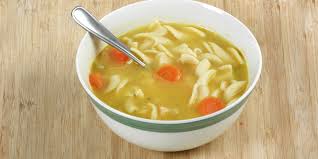 Lunch time, we’d walk to a little Jewish restaurant nearby. Emily, the tiniest girl in the women’s dorm, would order a gigantic lunch: a tall glass of milk, a hearty sandwich, dessert. I would always order homemade chicken noodle soup (at twenty-five cents the cheapest thing on the menu) and a glass of water. I’d open the two packets of saltine crackers and put both in my soup.

The middle-aged woman who waited on us watched this routine for a couple of weeks. One day, after serving me soup, she came back to the counter with her two hands full of saltine crackers. She dropped them beside my bowl.

By early December of my first year, my lack of money was a problem. I was expecting the next installment of my scholarship money, and it hadn’t come in. I had exactly thirteen cents to my name. I couldn’t afford to buy Christmas gifts for my family.

“Let me lend you some money,” Emily said.

I refused. I was determined to be poor but proud.

I had only thirteen cents to my name, and I had runs in my stockings. Not nearly enough, even then, for a new pair of nylons. I wasn’t permitted to wear slacks. At McGill, at the time, women living in the women’s dorm could only wear slacks on Sundays or to go skiing. We wore skirts, nylons, heels six days a week.

“In the States, everybody wears bobby socks,” Emily told me. She implied that Canadians were more than a little behind the times. No matter. Skirts, heels, and nylons with runs would have to do.

Then came my holiday miracle. I got a formal letter, on letterhead, from the Masons of Montreal. It seems that every year they gave a scholarship to a deserving student and that year, they were awarding it to me.  What luck! Remarkable since I had never applied and knew nothing at all about the Masons. But if ever an award came in handy, that was it. Fifty dollars. Enough to buy gifts, stockings, and tide me over till the installment came.

Christmas break came. Everyone in the dorm went home except for me and the eight girls from Hong Kong. They always sat at a table for eight and spoke only Chinese and only to each other. I sat at another table alone. My parents never found out that everybody else went home for the break; I never told them. I had no money for the long train trip home to Alberta.

On Christmas morning I was alone in my wing of the dorm. I unwrapped my presents,

dumped the contents of my stocking—the nuts, candy, orange, apple, fashion magazine, and fingernail polish on my desk. My mother had forgotten that I didn’t have a nutcracker, so I smashed the walnuts with my shoe and felt very much alone. 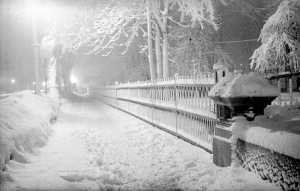 There were no meals served Christmas day. The dining staff had been given the day off. Most of the restaurants downtown were closed for the holiday. I bundled up and plowed through a bitterly cold wind, with my boots crunching in the snow, and ate lunch in a deli on Saint Catherine’s Street.

I’d been invited to a woman’s house a long walk away for a traditional dinner. Every Christmas she invited international students to her home. A mix of young men from around the world—and me. I was terribly shy, but not so shy that I had to walk home alone.

After Christmas my friend Emily had invited me to spend a few days at her house in Loudonville, near Albany. I was nervous. I didn’t know whether it was polite to let her parents pay for the treats she’d planned for me: a make-your-own sundae at Stewarts, a trip to the State Capital to hear Rockefeller, a trip to a shoe store where, unlike old-fashioned Canada where salesman brought shoes for one to try on, hundreds of pairs of shoes were lined up on racks. So much more up-to-date, Emily assured me.

I’d brought what I hoped was an appropriate gift for Emily’s mother, a bone china cup and saucer. At least in those days, every Canadian woman I knew collected cups and saucers and they didn’t have to match. By some extraordinary coincidence, Emily’s mother collected that very pattern. I was relieved. Maybe my gift was ok.

Both of Emily’s parents were lawyers and her mother was also a novelist. Apparently her mother’s hobby was sewing bathrobes. Privately I thought it odd. At the time, I didn’t own one. Emily’s mother opened up a trunk and inside were twenty-four bathrobes she hadn’t found anyone to give to. I was offered the bathrobe of my choice. I thought about it. It seemed okay to take one because she had so many. They were all made from the same pattern: a roomy kimono and not, I noticed, particularly well-made. My mother sewed very well, and she’d taught me to sew too. For a bathrobe, it didn’t really matter. The bathrobe I chose was a many-colored horizontal striped corduroy bathroom with two huge pockets. I wore it for years and years and years. It was practical and comfortable and colorful.

The evening before we left to go back to college, Emily’s dad showed us some special memorabilia in their basement family room. It seems that  Emily’s father had been active in the local Masons for a very long time. What a coincidence! It was the Masons in Montreal that had given me the money that had taken me through the month of December, that had let me buy gifts for my family, a smoked meat sandwich in a Jewish deli for lunch on a bitterly cold Christmas day, nylon stockings and more.

For years I didn’t make the connection between Emily’s father and the Masons of Montreal. I suppose it was too embarrassing for me to think I’d been the object of Emily’s family’s charity.

Now, of  course, I am certain that Emily Champagne’s family found a way to give me the money that I badly needed but was too proud to accept. What extraordinary kindness.

21 thoughts on “My Not-So-Merry Christmas”