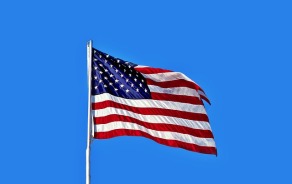 A conservative friend in Texas asked me a question that caught me off guard and set me thinking.

She hesitated before she asked me. “You weren’t born in the States so…how do you feel about the pledge of allegiance?”

The question was respectfully asked and deserved a thoughtful answer. I knew it mattered to her so I rattled off an answer that I hoped sounded positive and not too incoherent.

To be honest, I had never given it much thought. I didn’t grow up saying a pledge of allegiance in Canada. I always stand respectfully for the pledge though I don’t always put my hand over my heart, just feels kind of weird. I’m comfortable with the words except for “under God” which—to me—seems at odds with freedom of religion.

However, I believe America is much greater than the words. After all, the pledge was not written till 1892. The admonition to put one’s hand over one’s heart didn’t come until 1942, and the words “under God” weren’t added until 1954. People were deeply patriotic long before then.

I’m even comfortable if some people choose to exercise their right to freedom of speech by kneeling during the national anthem. Freedom of speech and freedom to protest peacefully matter.

But I think her question may have hinted at something deeper than the pledge. Can a person who was not born in the United States ever be as patriotic as a native-born American?

I can’t speak for everyone who came to this country from another, but I can tell my own story.

I am from Canada. When we crossed into the States to live here for the rest of our lives, I thought about the stories of others who had come from other countries. I felt as if I ought to have climbed mountains or crossed rivers; escaped violence, famine, or persecution; ought to be in shabby clothes, maybe wearing a kerchief over my head tied under my chin, maybe with my belongings wrapped in a pack on my back.

When we crossed the border in our 1965 blue Volkswagen beetle, with our baby tucked in the space behind the back seat, we’d traveled less than 100 miles. Easy.

Of course, getting that permanent resident card, the “green card,” had not been easy. It never is, but before 1965 it was harder for my husband (now my ex) than me. He was an Indian born in Pakistan. The laws at that time set quotas on immigration based on the country you were born in. There was no specific quota for Canadians: I should be fine.  But two thirds of the total quota was assigned to applicants from Great Britain, Ireland, and Germany. The quotas for everywhere else were pitifully small. The quota for India was 100, the same for Pakistan.

I would have happily stayed in Canada, but he wanted to come to the States where he believed career opportunities would be greater. In 1965 Lyndon Johnson signed the Immigration and Nationality Act. The previous quotas by national origin no longer applied. Now our immigration became a feasible dream.

My ex-husband had no close relatives in the States, one way to get a visa under the new rules, but he had a PhD, and he was hoping to get a job offer from a company willing to work to demonstrate that no American was qualified to do the job they wanted to give to him.

We hired an immigration lawyer and worked our way through the piles of paperwork and fact checking required of applicants. We needed to swear that we were not drunkards, prostitutes, mentally ill, etc. and we needed police clearance.

Some months later, after a trip to the American consulate in Toronto, hours of sitting, an intensive interview, and more paperwork, we were cleared to come to the United States. And after getting our affairs in order, we made that hundred mile trip in our little blue car.

Five years after we arrived, as soon as he became eligible for citizenship, my ex-husband applied for citizenship. He had no reservations at all. He very much wanted to be an American and had never wavered.

But me? Even though he continually urged me to apply for citizenship, it took me ten years. Every January I signed another alien registration form. Alien. Ugly word. Elections came and went, and I couldn’t vote.

I loved, will always love Canada, my motherland. Becoming an American (at least at that time)  meant swearing under oath before a judge not only that I would be loyal to the United States, but that I no longer had any allegiance to Canada.

Changes to the head and heart take time. Finally I tipped towards citizenship.  After all, two of my children were born in the States. I was almost certainly going to spend the rest of my life here. The United States and the American people were good to me. And I didn’t want to spend my life as an alien. I wanted to belong here.

Friends from New York City who had gone through the process there warned me that the test for citizenship was brutal.

“Study everything you can. Memorize the materials they give you.”

How old do you have to be to become a senator?

How many judges are  in the Supreme Court?

“You gotta learn it all.”

I had a hunch they worried about my chances. They had felt lucky to have survived the ordeal.

I studied. I overstudied. I walked in, ready for whatever I might face.

The test in Kingston, NY, was nothing like that in New York City.

Here’s my entire test. (It’s been awhile, but I think my memory is correct.)

I humbly believe I could have passed the test long before I came to the States. (So could most Canadians.)

And there was also a test of English proficiency. I was asked to write the sentence “I live in a big house.”

I aced it. (It didn’t hurt that English is my first language.) 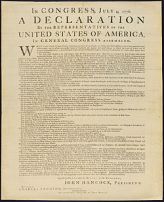 I was on my way to becoming an American citizen. Complimentary documents arrived in the mail from the Daughters of the American Revolution. Copies of the Declaration of Independence and the Constitution. Good stuff.

I, a woman descended from Loyalists who settled in the Canadian Maritimes, was being welcomed to citizenship by women whose ancestors had fought on the other, winning side. How wonderfully ironic!

The ceremony in Kingston was as fancy as a small town can make it. The boy scouts marched in and the Women’s Auxiliary of the Veterans of Foreign Wars. The women also wore uniforms, blue and crisply pressed.  Women in the front of the little parade carried big flags on poles inserted into holders on straps that crossed their ample bosoms.

Part of me smiled at the earnest boy scouts and ladies auxiliary. I wanted to stay in my head rather than entering the patriotic moment. But another part of me marveled at  their sincerity and good will.

As each applicant approached the judge to take the oath of allegiance, the judge gave him or her a little compliment. To the woman before me, he said, “What a pretty lady.”

As I came close, he said to me “so nice to see quality becoming citizens.”

Quality? What did he know of me? Nothing, really, except that I looked Anglo-Saxon. That particular compliment left a sour taste, reminding me of the American people’s history of  ambivalence towards immigrants.

But I had become a citizen.

My patriotism remains deep but complex and nuanced. After years of serious thought, I had taken a solemn and sincere oath of allegiance to this country. More than the passing rhetoric of one party or another, I admire and believe in the principles that this country was founded upon.

I believe in the Declaration of Independence and the Constitution.

What could be more beautiful than the words “We hold these truths to be self-evident, that all men are created equal…”?

I believe that worthwhile patriotism is not about declaring ourselves exceptional, nor denying or glossing over our shortcomings. It’s about remaining true to the extraordinary principles that should forever define and inspire us. It’s about working diligently to see them realized.

The pledge is good. But more important than reciting the words of the pledge or putting my hand over my heart are its closing words “with liberty and justice for all.” I believe in those words with all my heart.